How to Write a Basic Video Script [With Template]

The success of your video begins with your strategy, and once that’s in place, you need a script. Your script takes an abstract idea – one comprised of your strategic and creative thinking – and begins to shape it into something that can actually be produced as a video.

Sure, some video types lend themselves to off-the-cuff improvisation, like the follow-up video you send a prospect after your initial conversation or the Instagram Story you post of that guy doing yoga at the airport. And while jotting down a few bullet points to guide you through those videos is never a bad idea, the truth is, these videos probably don’t need a script.

That said, some of the videos you create for your business will have more extensive production requirements, and means you need to have a solid script in place before you ever hit record.

Whether you’re creating video for marketing, sales, customer success – or any other part of your business – you need to understand some basic elements that go into writing a video script.

First, I assume if you’re reading this, you’ve already done the work of creating your video strategy (i.e., determined your goals, audience personas, relevant channels, and selected specific video concepts) – and you’ve put some thought into the creative execution. If you have not done those things, do not pass ‘Go’, do not collect $200, and certainly do not start writing a script.

Create your strategy, then let your strategy determine the right concepts (e.g., a series of customer testimonials; FAQ videos; product explainer video). Your creative will be influenced by your available resources, especially your budget, and the level of production you’re planning. If you can afford to fly a DSLR-equipped drone over Tokyo, very cool. Go for it. But if you only have a shoestring budget and an empty office, approach your creative process accordingly. Your video concept must be attainable.

Second, this ain’t Casablanca. Some of the essential elements of storytelling certainly apply, but unless your business happens to be smuggling German rebels out of Morocco in the 1930s, you don’t need a magnum opus of a screenplay to shoot your company culture video. Let your strategy be your guide, and keep your goals and audience in mind when making choices.

Finally, the method outlined below is not the end-all, be-all. It’s intended to be an accessible process that will work for most of the videos you will likely be making for your business. Once you’re comfortable writing scripts using this process, you can start to branch out and adapt this process to better suit more adventurous productions.

With that out of the way, let’s get into the steps to writing an effective video script.

A short video treatment clearly explains what the overall concept of the video is, including the general creative concept. If you’ve already done the strategic work, you don’t need to pack goals and audience personas into this treatment; just provide a one-page outline of your video.

Start by writing a one-or-two sentence logline that summarizes the concept. For example:

“When a casino owner in Nazi-occupied Morocco sees his former lover arrive, accompanied by her husband––”

Nope, scratch that. This one for Lucid Thoughts, a series of videos about Artificial Intelligence solutions, is probably more relevant:

“This video provides a high-level explanation of Artificial Intelligence – what it is and how it works. It is meant to help the average person gain a better understanding of AI fundamentals, and the layman’s language used supports that purpose.”

Then, expand on that logline by writing a few short paragraphs that reflect the beginning, middle, and end of your video.

Your treatment is a critical step in providing a structure for the story you’re trying to tell. And whether you’re shooting a customer testimonial or an animated explainer video, structure is the foundation on which the rest of your story rests.

The basic idea that prompted you to make this video is, itself, the seed of your story. Your treatment gives you a structure onto which you can start to layer your story while keeping it focused, on-message, and within scope.

Imagine giving Michael Bay two hundred million dollars, no script, and telling him to come back in six months with a movie. God only knows what you’d get. Sure, it could be awesome, but it could also be Transformers: Swords of Saturn. I mean, the image below is from a script that had about twelve writers and it’s still utter nonsense. Don’t assume you’ll do any better without a treatment to shape your story.

Let’s say the story you’re trying to tell is about the history of your company. What are the inflection points you need to highlight from its founding through present day?

Customer testimonials tell a story about how working with your company changed theirs. FAQ videos tell a story about an issue a customer may have with your product or service and how to resolve it. About us videos tell the stories about your team – and by extension, your culture. And that iPhone video of Doug in HR eating tuna salad with his fingers tells a very sad story.

Give each scene a short description, including who or what needs to be in it and the purpose it serves in the video.

“Show, don’t tell,” is an ancient screenwriting adage that still applies in the brave new world of video. When you’re developing your script, consider the important visual elements you need to include in order to effectively convey your message.

For example, rather than telling us in voiceover that your employees ride Razor scooters around a modern office, drink the free beer on tap, and play ping pong on the roof – show us those things, so we can appreciate just how cool your company is. That begins by defining more detailed shot descriptions – Trevor and Gabe roll into the conference room on Razors; Courtney and Layla enjoy IPAs in the kitchen; Josh B. and Josh K. play ping pong on the roof; Doug eats tuna.

Include any visual effects or animated elements that you plan to add during post-production, even if they’re tentative or you haven’t fully conceptualized them just yet. This way, your actors can react to them on camera and your crew will understand how to properly frame the shot.

Now that you’ve determined the visual elements that you know you’re going to want to show, it’s time to figure out the audio elements you’ll need to tell the rest of your story. These elements include dialogue, voiceover, music, and sound effects.

When writing dialogue, it’s critical to keep in mind your audience – and more specifically, the language and tone, or voice, that you’re using in your video. Is this a technically savvy audience? If so, you may be able to get away with using a more technical vocabulary. Are you trying to explain complex subjects or processes to an unaware audience? Then avoid technical or ‘inside’ language and find ways to simplify your message without being condescending.

Compare the first page of the AV script for Lucid Thoughts Episode 1 with the final video: 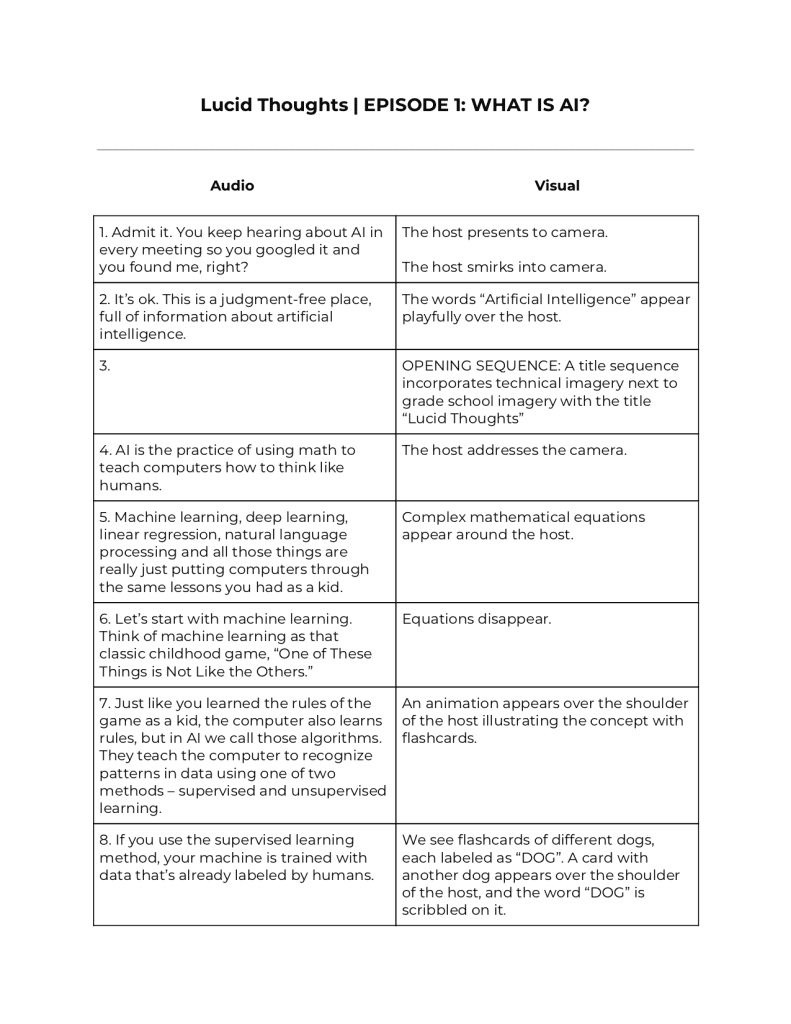 Maybe you want them to ‘Get a demo’ or ‘Place your order’ or ‘Subscribe now’. This is a video, so your call to action language doesn’t need to fit on a button, but that doesn’t mean it shouldn’t be clear, concise, specific, and singular.

By using a professional format when writing your video script, you make both pre-production and production process easier for everyone. There’s no one right way to format a video script, and ultimately, whatever works for you and your process is fine. For most videos you’ll create for your business, we recommend using this AV video script template. This standard format will help your talent and crew stay organized and on schedule during your production.

The script is divided into two columns. In the left column, you have the dialogue that is being spoken by your actor(s), or via voice over. In the right column, across from each block of dialogue, you have the key visuals that will be seen on screen at that moment. Now, as discussed in the previous step, you don’t have to describe every detail of the visual; instead, think about what is most important for the viewer to see while hearing that specific line of dialogue.

Once you get more comfortable with the writing process, you can begin to tackle more advanced script formatting, like the example below. 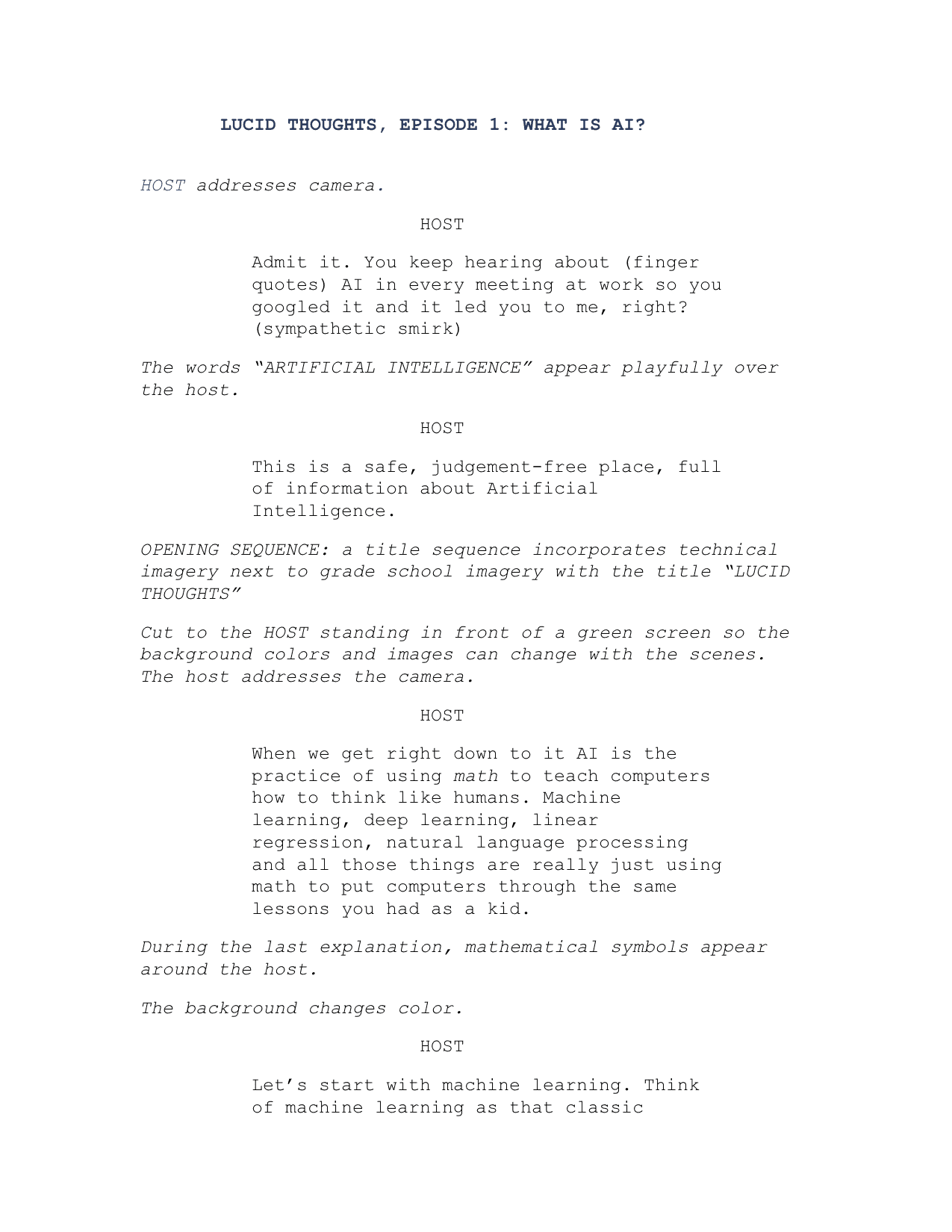 This more traditional screenplay format is especially useful if your video is more narratively complex, like these Yeti Presents videos. Don’t worry – you don’t have to go crazy with the tab key and spacebar to make it look right. Programs such as Final Draft, Fountain, and Movie Magic make professional screenplay formatting easy. Or, for a free version, try Celtx or Trelby.

Step 7. Read Through and Revise

Before the first day of your shoot, convene a group of the principals involved in the production to read through your video script. Ideally, this group includes – at least – your actors (or anyone who will be reading lines), your director, your producers, your director of photography, and a writer who can mark any necessary changes to the script. In many instances, several of these roles will be held by the same person.

The read through gives the actors an opportunity to say their lines out loud and ask any questions, from the conceived tone of the video to the meaning or pronunciation of specific words. This process can help you realize that a line of dialogue can be replaced with a simple gesture or look from the actor, or you might notice that certain visuals don’t quite match the voiceover as written.

Now is the time to make changes to your script.

No matter how much you prepare, life is going to throw you a curveball or two on the day of your production. It could be the weather, it could be a non-cooperative lighting rig. Maybe you forgot to get permission to shoot at a certain location, or maybe your actor just can’t say the word ‘Worcestershire’, thus foiling your plans to share your famous BBQ sauce recipe with the world.

Study your script ahead of the production to understand where you have the flexibility and where you don’t. Will your message still come through if you have to shoot indoors as opposed to outside? Can a word or an entire line be changed if it’s not working in the scene? Do your actors have the freedom to improvise, or is it necessary to stick to exactly what’s written on the page?

Once your script is locked (production lingo for ‘done’), make sure it gets into the hands of everyone who needs it. Send PDFs and print paper copies… then print a few backup copies just in case.

But whatever you do, don’t panic. If you’ve followed this process, that means you’ve done the work – so trust the script. It’s the thing that will keep your production moving along smoothly. And that’s what will keep you on time, on budget, and on track to create the best possible video. 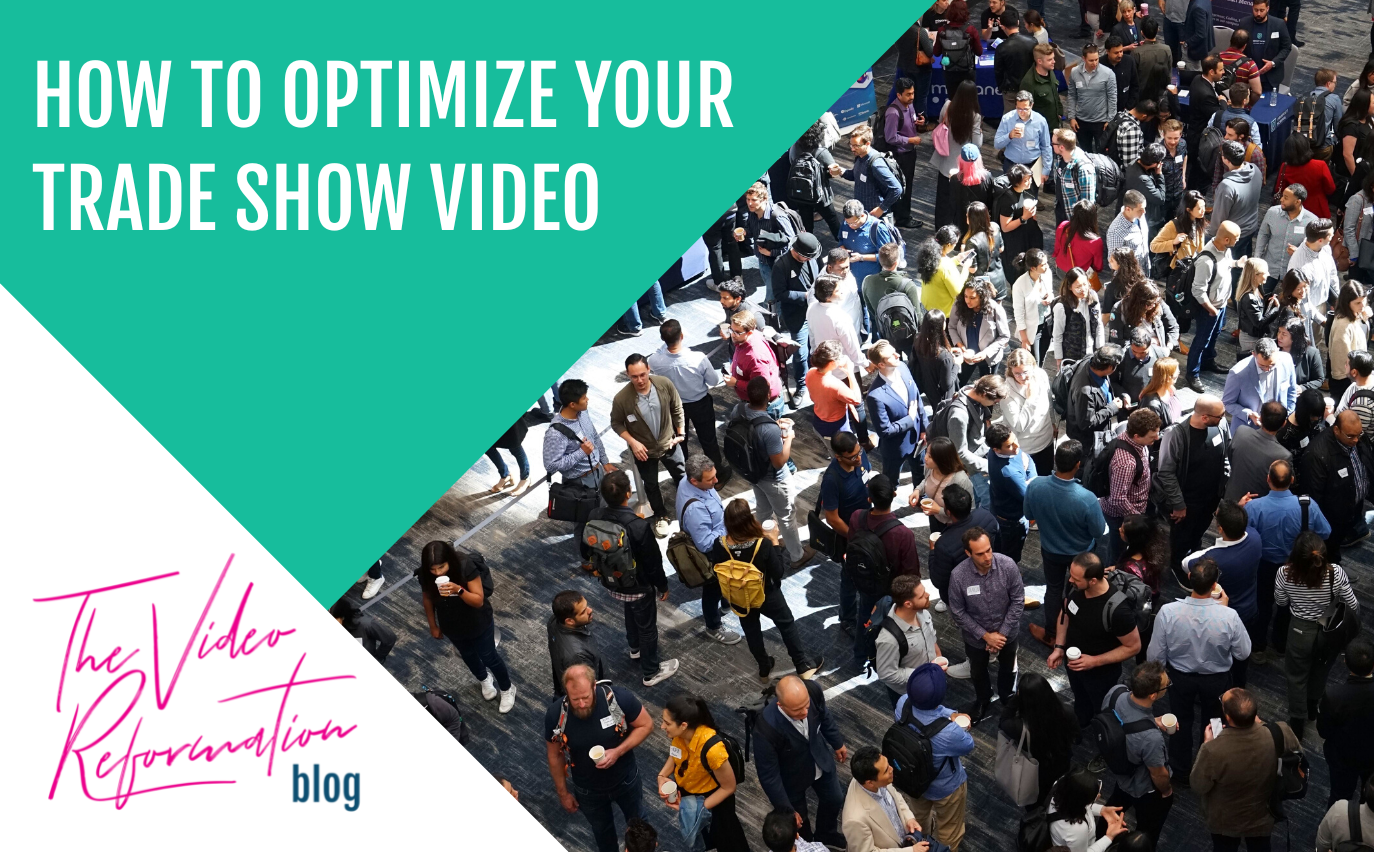 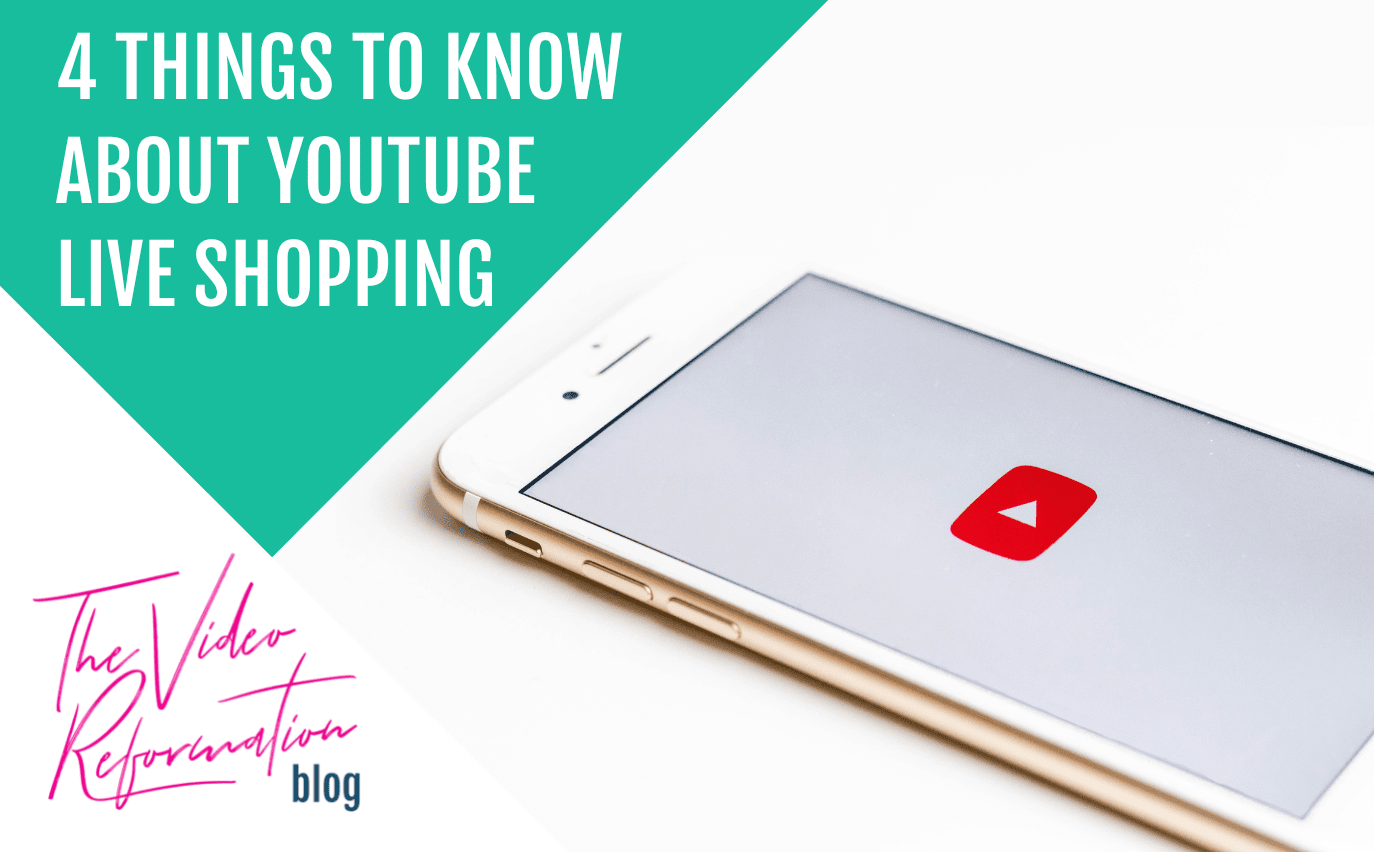 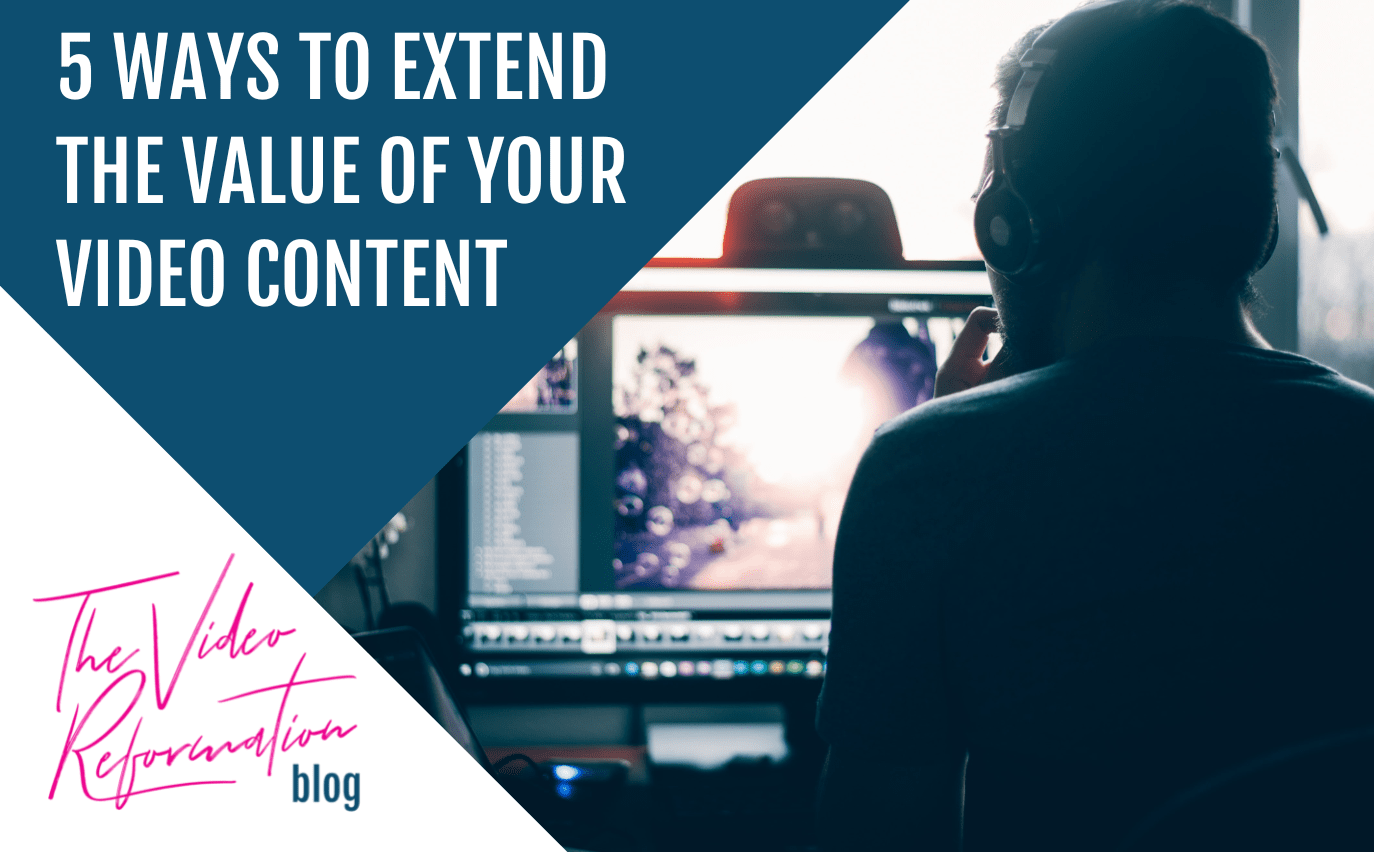